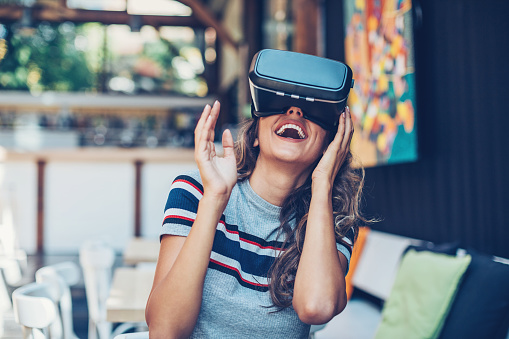 Virtual Reality is an emerging technology that has taken the whole world by storm. Many knows it as a three-dimensional, computer-generated digital world that can be explored by use of headsets, sensors, glasses and other special equipments, but rarely do they know its many applications. This article discusses various applications of the VR technology

VR Glasses – Virtual reality glasses are becoming a hit in computer gaming and entertainment industry in that they incorporate interactive functionalities unlike the traditional glasses. Apart from being able to show images in 3D, they can also be used to play audio files, videos, view maps and connect to the internet. There are many renowned brands of VR glasses available in the market today e.g. Google, HTC, Samsung and many more.

VR Headsets / VR Boxes – A VR Headset provides immersive virtual reality environment for the wearer. VR headsets are widely used in computer gaming but are also used in other applications, including simulators and trainers. A wide range of these headsets are cross platform i.e. they are compatible with most mobile operating environments. They can be used to watch 3D movies from mobile devices. Various types are available e.g. Oculus Rift, HTC Vive, Sony PlayStation VR, Google Cardboard among others.

Healthcare – This sector has been one of the biggest adopters of the VR technology, established health institutions are using computer generated images for treatment and diagnosis. Virtual-reality simulations use actual diagnostic images from a computerized tomography scans or ultrasounds to construct 3D models of a patient’s anatomy. The virtual models help surgeons and medical practitioners to perform safe medical procedures on a patient. Through virtual reality and with the help of 3D printing, models of medical parts can be developed for studies and references. Other examples of VR in healthcare includes human simulation software, virtual robotic surgery etc.

Automotive Manufacturing – In automotive industry, VR technology has been deployed to design and process virtual prototypes of vehicles before real production can commence. This is done using high-tech simulation software to enable designers to inspect and test various aspects of the vehicle before mass production. In 2013, Ford became the first automobile maker to deploy a cross-cutting high definition virtual reality lab that enabled its designers and engineers to work simultaneous and real time. This saw massive improvements in the design and general out view of Ford Fusion and Ford Mustang brands. As a result of this simulation, the company was able to cut production cost as result of man power transfer.

Shopping – Traditional online shopping may be a thing of the past if the advancement of VR technology is anything to go by. Of late, apps that can provide virtual tours of stores have come into play thereby improving on the traditional online shopping experience. This is a big paradigm shift from browsing online catalogs since a shopper can virtual walk through a store and select whatever he/she needs. Emergence of apps like Trilleniumcould even allows collaborative virtual shopping where one can shop with his friend.